How to Hook Up a New Computer

For starters, let me apologize. In my last post I said I’d be gone for so long and then return and get back to blogging. I did the returning part, but I didn’t follow through with the blogging part. I have plenty of excuses to provide, but no good reasons. I suppose that’s a benefit to not having much in the way of readership?

One of the things that seems to frighten a number of beginners, even if they are fairly confident with the use of a computer, is the hardware. Some time prior to my trip, I’d bought a “new” computer for my mom. Not new, but new to her.

She held onto it all that time, waiting for me to come hook it up for her. She didn’t know how and didn’t feel confident enough to do it herself.

I encountered that same sort of situation many times at work. I myself used to be terrified of touching the hardware. A computer, like any other fancy electronic equipment, looks and feels so delicate! In spite of the big metal case, the parts inside are small and can’t defend themselves! AGH!!!

We once received an internal DSL modem. Internal means you have to bust open the machine and plug in the modem card. The woman at the DSL company said “It’s like popping in a Pop Tart, it’s easy.”

Well, she was right.

Now, I still don’t condone just anyone, especially Super Beginners, just plugging in stuff at random. When it works, it’s cake. When it acts up, it can be difficult to troubleshoot. Nevertheless, the process in and of itself is simple.

That said, the process of hooking up a new computer is even easier, and doesn’t require opening the case. In fact, connecting the parts to a computer is virtually foolproof and anyone can do it.

This is what the majority of all modern computer towers look like in the back.

The first thing to take notice of is that almost every single part is colored. My use of the camera flash overexposed the picture a bit, but you can make out most the colors.

Also look at all the little drawings. For example, at the very top, above the A B C D, you can see two circular ports. These are PS/2 ports. The left one is a lavender color, the right is a seafoam green.

Although you can’t make out the pale purple on the left side, you can clearly see the little drawing of a keyboard. On the seafoam green side, you can see a small drawing of a mouse. When you take a look at a PS/2 keyboard or mouse, the plug will match the color of the port. That tells you immediately where to plug it in.

Now what about the royal blue port? What if you don’t know what that little drawing means? Again, if you take a look at the color of your connectors, you’ll see that the monitor has a connector that matches the color of that port.

Maybe you are like one of my friends though – colorblind, and unable to notice the different shades? Maybe you cannot tell apart the shades and you don’t recognize the little pictures. What do you do then?

That’s the third layer, if you will, of assurance – you can’t fit something where it doesn’t belong. 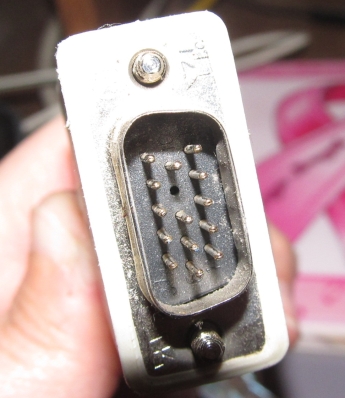 This is the VGA cable. You can’t see the blue part that I mentioned because of the angle I’m holding the connector. But you don’t need to see the blue part. Notice that there are 3 rows of pins.

This is an important point for two reasons:

OK, I will admit – these rules don’t work for every port in the computer, or every cord you can plug in. For example, does this cord look familiar?

Is this for a speaker or microphone?

What is it for? Can you tell? Can you tell which port it goes into? There are 3 small, circular ports that look identical except for the color and the drawing. How do you know where to plug it in when it will fit the same in any of the 3 ports?

For starters, this cord goes to a speaker. Speakers get plugged into the green (center) port on the computer. Most modern speakers will have a green connector, so you automatically know. This cord is obviously from an older set of speakers. Some modern computers come with those 3 ports in the front as well.

If you couldn’t see the green color, you’d have to pay close attention to the drawing. Let’s look at the little drawing for the green port. It shows curved lines (sound waves) in a convex shape. They are curved outward to show that this is for sound coming out.

If you look at the drawing on the light blue port to the right of it, you’ll notice it’s the exact same drawing with the sound wave lines curved inward, showing it’s for sound coming in (a line-in port). And the pink one on the left is obviously for a microphone.

The difference from the other ports – even though you can fit the same connector into 3 different ports, you can also safely use the process of elimination. After discovering that no sound was coming out (assuming the volume was up, speakers were on, etc) you could unplug the cord and try another port with no consequence.

The USB port is a little different. There are several (denoted in the black section just below the speaker/mic ports and the two below that, that are not colored) on the back, and often some on the front as well. They should all work the same.

The port and the connector are both small and it’s hard to see which way it goes. However, it’s still pretty fool proof. Even though the connector/port doesn’t have a unique shape, it will still only fit one way. If it doesn’t seem to fit either way, try jiggling it slightly into the port from either direction. Sometimes, it is hard to get it lined up exactly right.

Another thing that may foul up people with older computers is the ethernet/phone jack. Older computers may have a phone jack (for the dial up modem) whereas newer computers typically only have the Ethernet port.

If you look at the image of the back of the computer, you’ll see a small drawing, to the right of the 2nd row of USB ports. It’s a line with one small square above it, and two small squares below it. This is where your ethernet cable is plugged in.

This is yet another instance where you can only fit it where it belongs. If you are having to force it into place, it doesn’t belong there. A Cat5 cable has a bigger plug than a phone cord, so there’s no mistaking where it belongs.

There are some other cables and ports that haven’t been covered here, but the purpose of this isn’t to explain exactly where to plug everything in. Rather, I’d like to invite beginners and others who aren’t confident in their abilities to go ahead and try it.

Some tech companies will charge you $30+ for something you could do yourself in less than 5 minutes.  Computers are delicate electronic equipment, but not enough so to warrant being afraid of them. Remembering that it generally won’t fit where it doesn’t belong will help you to relax and hopefully be a little adventurous and try it for yourself. 🙂

Tell Me What You Think Cancel reply